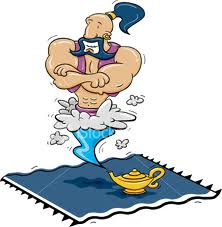 With the Christmas Panto’s still close in our minds, this week we bring you the historical origins of magic flying carpets that are often used in Panto’s and children’s cartoons.

They are found in many oriental tales and known as Magic carpets and flying carpets. They are often referred to in the stories of the Thousand and One Nights, but appeared in writings of many other civilisations too. Contrary to popular thought, the original Galland manuscript of Thousand and One Nights doesn’t have any mention of flying carpets at all, and in this version of Aladdin (or Al-a-Diin) the Princess was abducted on her bed – not a carpet.

The first mention of this incident being on a flying carpet, was by Walt Disney in his cartoon film of Aladdin in 1992.

13th Century Story of the Queen of Sheba

The story says that the Queen of Sheba had a gifted royal alchemist who made a small brown rug hover above the ground during its colour dyeing process. The Queen had another carpet made from green silk embroidered with real threads of silver and gold and studded with jewels, and sent it to King Solomon as a token of her love.

But the story says that Solomon was too busy to receive the gift and gave it to a Courtier. The Queen was said to be broken hearted and removed her royal patronage from the alchemist, who never made another ‘magic’ carpet.

Another story says that God gave a large magic carpet to Solomon which carried 40,000 men in the air causing Solomon’s ego to be over inflated with his own importance. God then decided to teach him a lesson and shook the carpet in mid air causing 40,000 men to fall to their death. (For interest, 40,000 people is half the spectator capacity of Wembley Stadium)

Luckily, SJS have never come across a flying carpet, but we have some very happy customers who think that our amazing Texathermic cleaning system is ‘Magic’!

If you would like to experience our ‘MAGIC’ carpet cleaning, in Loughborough, Leicester, or anywhere in-between; call us today on: